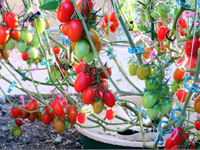 Do you want to start growing food in a water saving and sustainable way too? Visit our online store and purchase one of our boxes!

A new Guinness World Record for "Most tomatoes from a single plant"?

Encouraged by the success of his Juliet of last year, Bill McNeese applied to be in the run to set a new Guinness World Record for 'Most tomatoes from a single plant'. He planted a new Juliet in his garden in March of this year. Bill will try to achieve even better results which will have a great chance of being the new Guinness World Record holder. Below you can read his journey so far. Do you think he can do it?

Over 4,300 tomatoes from one plant, supported by the Waterboxx®

Grow tomatoes in December! The Waterboxx® makes it possible

As unbelievable as it sounds, at this moment is Juliet still producing! Total count:

As of today, Juliet gave 2,819 fruits with a total weight of 100.12 lbs. (45.4 kg). It's hard to believe, but small fruited plants can produce more pounds than large fruited varieties. Bill thinks it's because, in general, they tolerate the heat better. Juliet, now way past its prime, doesn't give up, still sets lots of fruits. If frost doesn't hit until after the first week of December, Bill expect another 5 to 8 lbs. (2.3 to 3.6 kg) of production.

Which tomato varieties do you need to plant to get a high yield?

How did the tomato plants produce during the summer of 2017? Well, with no rain and a summer that seemed hotter than ever, the production was good! Big Beef was growing in a Waterboxx® plant cocoon with four wicks (the answer to the heat and rain problem).

Over 36 kilo's of tomatoes from one plant! And still counting..

Regardless of almost 7 weeks where Big Beef was not able to set new fruits (high temperatures = blossom drop), Bill has now harvested over 70 lbs. (32 kg) of tomatoes. In the last six days, he has picked about a pound a day. Still waiting on another 15 to 20 fruits to ripen. The ones that pollinated in mid-July but had a delayed development due to the heat.

Get a higher yield, even during the heat of the summer!

Since 2014, Bill is doing trials with the Waterboxx® plant cocoon and various vegetable and fruit species. His latest updates have been about tomatoes, which were mostly a big success!

The extreme temperatures he experienced during the month of June this year were of big concern. Temperatures reached triple digits (Fahrenheit) almost every day. He has never seen anything like it - temperatures rose to 110˚F (43,5˚C). It has been hard for the plants, even with the protection that the Waterboxx® plant cocoon offers.

Planting tomatoes with high temperatures with the Waterboxx®

Bill has grown multiple fruits and vegetables with the Waterboxx® plant cocoon in his garden. He shows you that you can, with some creativity, grow a lot of healthy fruits and vegetables in a water saving and ecological way. He has started growing biological peppers in Hemet, California. On the image below you can see multiple Waterboxx® plant cocoons beside each other with different vegetable varieties.

Growing lettuce with efficient water use in your garden

Bill McNeese – user of the Waterboxx® plant cocoon – created a planting place for salads. He uses a wooden box, but you can also do this in the soil of your garden. With the Groasis Waterboxx® plant cocoon Bill produces organic salads in healthy soil instead of producing hydroponic. Look at his amazing results of organic food without using pesticides while using only half a gallon of water each day.

Growing tomatoes in summer and winter