Eroded areas suitable for trees occupy, by far, the biggest part of land on earth: over 2 billion hectares (5 billion acres) - that is over 30% of Earth’s surface ready to reforest!

Other prairies and poorly wooded areas arose by natural grazing, or by human cattle breeding, after which wind helped keep these areas open. Over time, very large areas have been deforested particularly due to human intervention. On the one hand, there has been the ever-growing need for agricultural and horticultural land; and on the other, the need for wood for crafting, industrial and domestic (charcoal) purposes.  Overgrazing (i.e. by goats and sheep), has literally chewed entire former woodland areas into new extensive deserts; this too is a problem.

Can we turn deserts into forests?

Sometimes people use the argument that we cannot change deserts into woods, as trees will not grow there. This is however not true: once, most deserts were green, and the real cause of their existence and status now, is humanity itself. In the Bible, Israel is described as the land of milk and honey. Mesopotamia was the region where the Tower of Babel was constructed; and we all know of the overwhelming wealth then in that now poor and dry region. In Tunisia, there is a Colosseum in EL Jem. It is now in the middle of the desert; but at its time of construction, it was able to support and house over 30.000 people. At that same time, North Africa was rich and fertile with many inhabitants. We all know the history of Carthage and Egypt. At that time, rich and wealthy; now poor as a result of the desertification. Therefore, we know that fertile soils cause wealth, and desertification causes poverty. This is why we have to restore Earth’s surface - and the instrument to do it is the tree!

The areas on the world that once had trees

All the yellow, orange and red areas were covered with healthy forests 2,000 years ago. Now they are infertile and non-productive deserts which create poverty. If we replant this area with trees producing economically interesting products, we can solve the erosion problem, the climate problem, and the food problem. In this way, we can again create wealth for these areas and inhabitants. 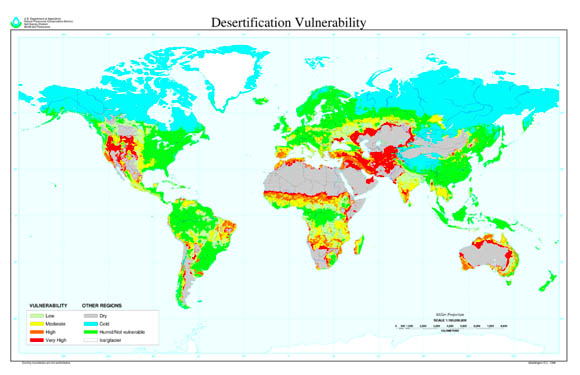 How to restore deserts into fertile land

In many countries, desert reforestation efforts often occur with expensive and capital-intensive methods. The problem with several of these methods is that they often require subsidies to be economically viable.  If we want to plant 2 billion hectares of deserts with trees - as Pieter Hoff's objective to cause - then these methods and principles are impossible to follow. The problem is too big to solve with subsidies. The problem should solve itself by developing a principle where an investor, NGO or government can have a good Return on Investment (ROI) by reforesting the deserts. If we want to plant 2 billion hectares of trees, ROI - not subsidy- is the key word. Another problem with many methods and attempted solutions, is that they are not sustainable. In many cases, groundwater is being used that has been created throughout thousands of years - and now it’s being used up in only a few hundred years!  In order to use this water, groundwater pumps are installed to take it from the soil; and pumps are installed to pump it to the trees. So, besides using precious groundwater, expensive energy is also used.  All in all, we may say that many of these solutions are not sustainable; and many of them, if not all, will not lead to the solution that we need.

An extra advantage of the Groasis Waterboxx® plant cocoon is that it helps us to prevent fertile land grabbing. Nowadays, some companies and foundations start to reforest huge areas of fertile land with products - e.g. sugar cane or trees - that are able to produce biofuel. This means that land has the potential to feed people, is used to make biofuel that people in rich countries can use in their cars. We consider it unethical to use fertile land to produce biofuel where it could produce food. The Groasis Waterboxx® plant cocoon offers the choice to use eroded, rocky and arid land, and make it possible to produce on a huge scale, biofuel through foresting; and moreover, do it at a lower cost than on fertile soil. There is 2 billion hectares of land waiting for this solution. Read all about the danger of land grabbing here.

Where does the idea of the Waterboxx® plant cocoon come from?

In Morocco, in the Sahara desert "on rocky soils", Pieter saw a method which is old and sustainable; and parts of this method he has copied: ''I learned from thousand year-old methods and improved them with the Groasis Waterboxx® plant cocoon system''.

Their method consists of various steps:

With the Groasis Waterboxx® plant cocoon, we can copy thousands of years old techniques and improve planting results. This way of restoring deserts or rocky areas, is very cost attractive; it is also very sustainable as it uses water from the air, and doesn’t use electricity and expensive energy.