Regardless of almost 7 weeks where Big Beef was not able to set new fruits (high temperatures = blossom drop), Bill has now harvested over 70 lbs. (32 kg) of tomatoes. In the last six days, he has picked about a pound a day. Still waiting on another 15 to 20 fruits to ripen. The ones that pollinated in mid-July but had a delayed development due to the heat.

There hasn’t been a drop of rain in his garden during the summer. Nevertheless, he didn’t add any water to the Waterboxx® since the end of July. The plant, with its strong root system seeks out its own.

Without an ounce of exaggeration, Bill would have already reached 100-pound production, except for the weather not cooperating. Dozens of new flowers never got a chance to set in this heat. He could only imagine what this amazing variety is capable of in Waterboxx®, in an area with a long moderate summer, or in a climate-controlled greenhouse.

Today, Bill stated with cutting back his giant plant, leaving some of the green fruits to finish ripening. He didn’t want it to be more than 3 to 4 feet tall (1 to 1.20 meters), and nicely thinned, so it can begin new, healthy growth. By late September with milder temperatures, he should start seeing a lot of new fruits. He anticipated another 20-30 pounds of production by late October/early November.

Since many of the Big Beef fruits already have been harvested, the plant looks quite bare. Bill is still in the process of pruning it back to support new (fall) growth, for when the temperatures for setting fruits get back in the right range. At this moment, there are only 8 to 10 fruits left to ripen, then the last bit of pruning can take place. The pruning is just an experiment of Bill. Until mid-November, there will be less sun, of course, but the weather should be in the right range.

During this morning, Bill picked another four pounds of tomatoes from the plant, bringing the totals to: 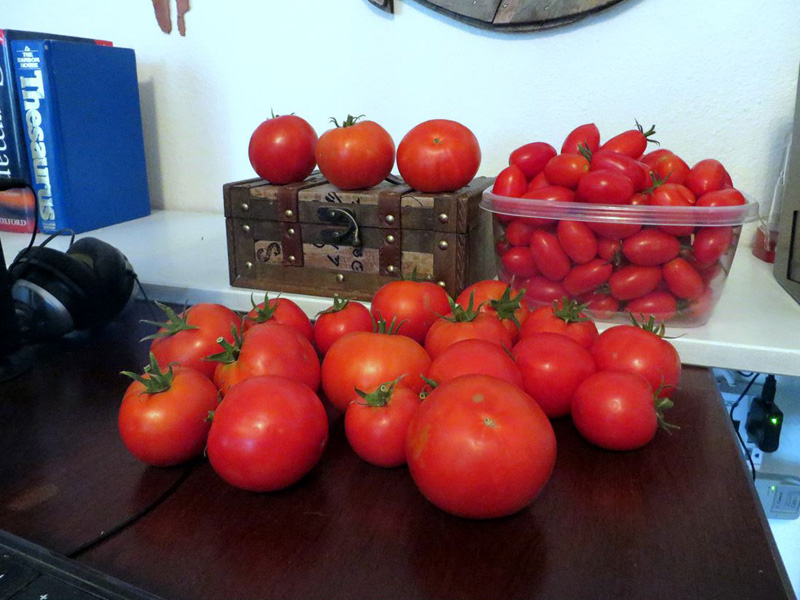 The fruits are getting smaller, but that’s what he expected from a plant that is this old. The neighbors are loving the tomatoes too! As Bill quoted:

‘’Never a problem giving away tomatoes that taste far better than you can buy at the store.”