Since 2014, Bill is doing trials with the Waterboxx® plant cocoon and various vegetable and fruit species. His latest updates have been about tomatoes, which were mostly a big success!

This year, the tomato plants (Big Beef and Juliet) had to endure a very hot summer. Again. Since June 14th, the temperatures rose above 100˚F (+37˚C) and haven’t let up. That’s earlier than last year. 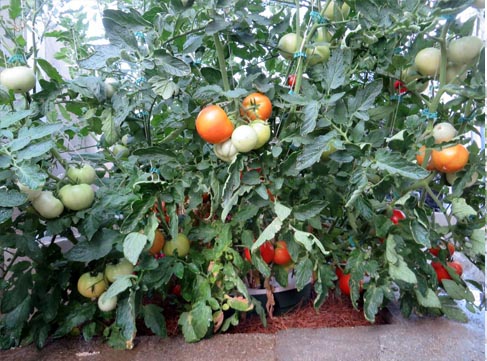 Bill has done the best he could, but after mid-June, Big Beef hasn’t set another fruit. Juliet stopped setting around June 28th, so it shows a little more heat tolerance. Once the plants went "dormant", both began to ripen their fruit in mass. On July 23rd, Big Beef gave 34 lbs (15.4 kg) and Juliet 11.5 lbs (5.2 kg). According to Bill, these poundage's will increase to about 50- and 22 lbs. (22 and 10 kg), respectively. That will end the harvest. But the story is not over.

Bill is trying a new approach this year to get a second crop from the same two plants, how exciting is that! By August 15th every fruit should have ripened and been picked (for the record, August is hotter than July here, so no new fruit will set).

By mid-August, he will cut the plants back to a height of about 3 feet (0.90 m). They are now each about 7 feet tall (2.15 m). If they respond like Bill’s eggplants did - and he think they will - after cutting, they will spring back with healthy new growth and produce a large second crop in the fall. Harvest can continue until about the first week of December without plant protection.

Until this moment, Bill has relied on two methods to pollinate his flowers.

But, in early spring (March and April), it is a different story. The temperature in the nights are often in the 30’s and 40’s (between 0 and 5°C). To ensure that the plants are getting pollinated, Bill has bought a ‘VegiBee Garden Pollinator'. He has used the VegiBee in the fall of 2017 (for the second harvest).

When the heat started in 2017, Bill has wrapped the Big Beef in a 40% shade cloth, the top and all sides expect the north. Unfortunately, it didn’t help that much because the ambient temperature reached +95°F (35°C). At that moment, pollination stopped completely. Shaking, etc., had no effect. But, the shade cloth did help the fruit quality to go up (no blotching or sun scald). The shade cloth was only on the South-West side of the plant.

Bill has discovered that once the fruits set on the plant, even the smallest, extreme heat doesn’t stop them from developing. The shade cloth would help growers to get a better quality, marketable fruit.

In the beginning, Bill thought Big Beef wouldn’t reach 60 lbs. (27 kg) until the middle of August. Instead it got 59 lbs. (26.5kg) on this day. Only two tomatoes ripened in June.

Juliet followed much the same pattern:

The plants remain healthy and production should continue, but slowed down until September/October time frame. On the South-West side, Juliet doesn’t get direct sunlight until 11 AM. The plant produces well.

How to get a higher yield in your garden

Bill wants to bring out the following points. Note that he is still learning, so some of this conclusions and techniques can change over time.

No new flowers bloomed after June 14. They all aborted before they could open. That was quite a loss of production that couldn’t be helped (3 to 4 trusses per leader), and so very early in the season. However, on the trusses in question, the flowers didn't abort after the pedals withered. Their pedicels stayed green and thickened, indicating pollination had taken place. They just delayed a month then decided to development.