The extreme temperatures he experienced during the month of June this year were of big concern. Temperatures reached triple digits (Fahrenheit) almost every day. He has never seen anything like it - temperatures rose to 110˚F (43,5˚C). It has been hard for the plants, even with the protection that the Waterboxx® plant cocoon offers.

Some tomato varieties Bill tried stopped growing and flowering as soon as the heat hit. But two varieties, Early Girl and Stupice, tolerate the heat better than you would expect and are flourishing in the Waterboxx® plant cocoon. Bill has devised a way to install shade cloth and remove it quickly when it’s not needed. 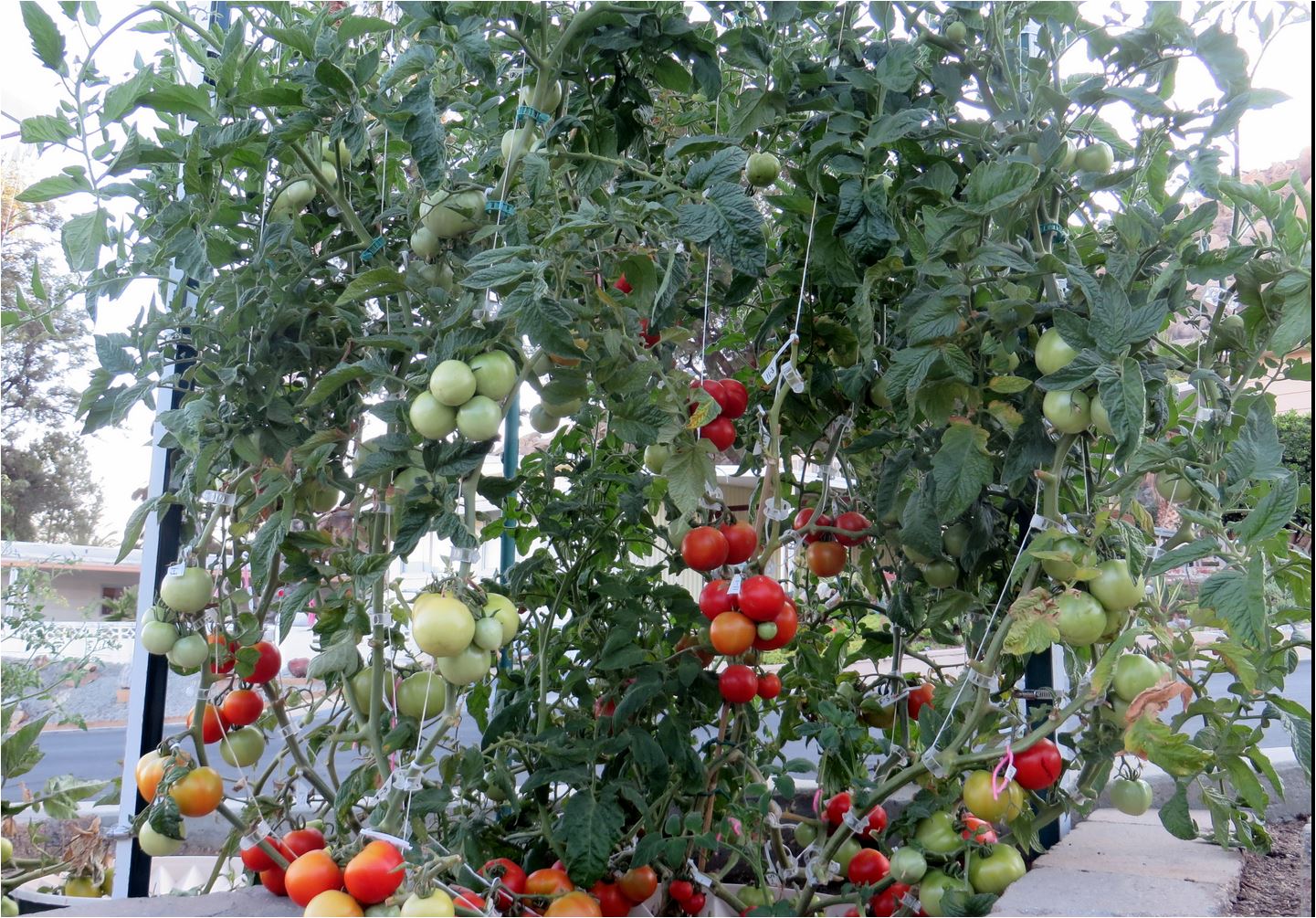 The tomato plants in the Waterboxx® plant cocoon

Waterboxx® plant cocoons have 3 wicks, Bill is growing one plant per box.

Variety 1 - Early girl: The main stem is 8.5 feet (2,6 meters) tall and is still setting fruit, despite the heat and intense sun. Bill has harvested 217 tomatoes with a total weight of 44.2 lbs (over 20 kg) between April 22nd, 2016 and July 4th, 2016. Most of that harvest came during the month of June. These results show that if you plant with care, use the right varieties, and meet the plants’ needs, small growers can make a good living. You don’t even need a greenhouse!

The plant has 10 strong vines (suckers) that were allowed to grow on it. Most gardeners/farmers would argue that that is a problem, but according to Bill it is not. Charles Wilber, who holds the world record for tomatoes (poundage) grown in the ground – not hydroponically – found that 19 stems are optimal.

Many of the fruit on the lower stems have now been picked. There's plenty left on the upper part of the plant, and the plant hasn't stopped growing yet.  Bill expects that by the end of August the plant should have easily surpassed the 50 pounds mark (almost 23 kg)!

Variety 2 - Stupice: This is Bill’s heirloom treasure and it is also doing very well. It is the younger one of the two plants. This plant (see photos below) has been producing since May 26th, 2016. Since then it has yielded 88 quality fruit with a total weight of 9.9 lbs (4,5 kg). The average fruit size is holding at 1.80 oz. (51 grams), which is a good size for this variety.

Last year Bill grew Pruden's Purple in the same Waterboxx® plant cocoon and he harvested 14.3 lbs (6,5 kg) of tomatoes in the season. This year Bill expects to go way beyond that. Stupice may be one of the only heirloom varieties that has a built-in disease resistance (not formally documented, but widely reported by growers) and it has tremendous vigour. 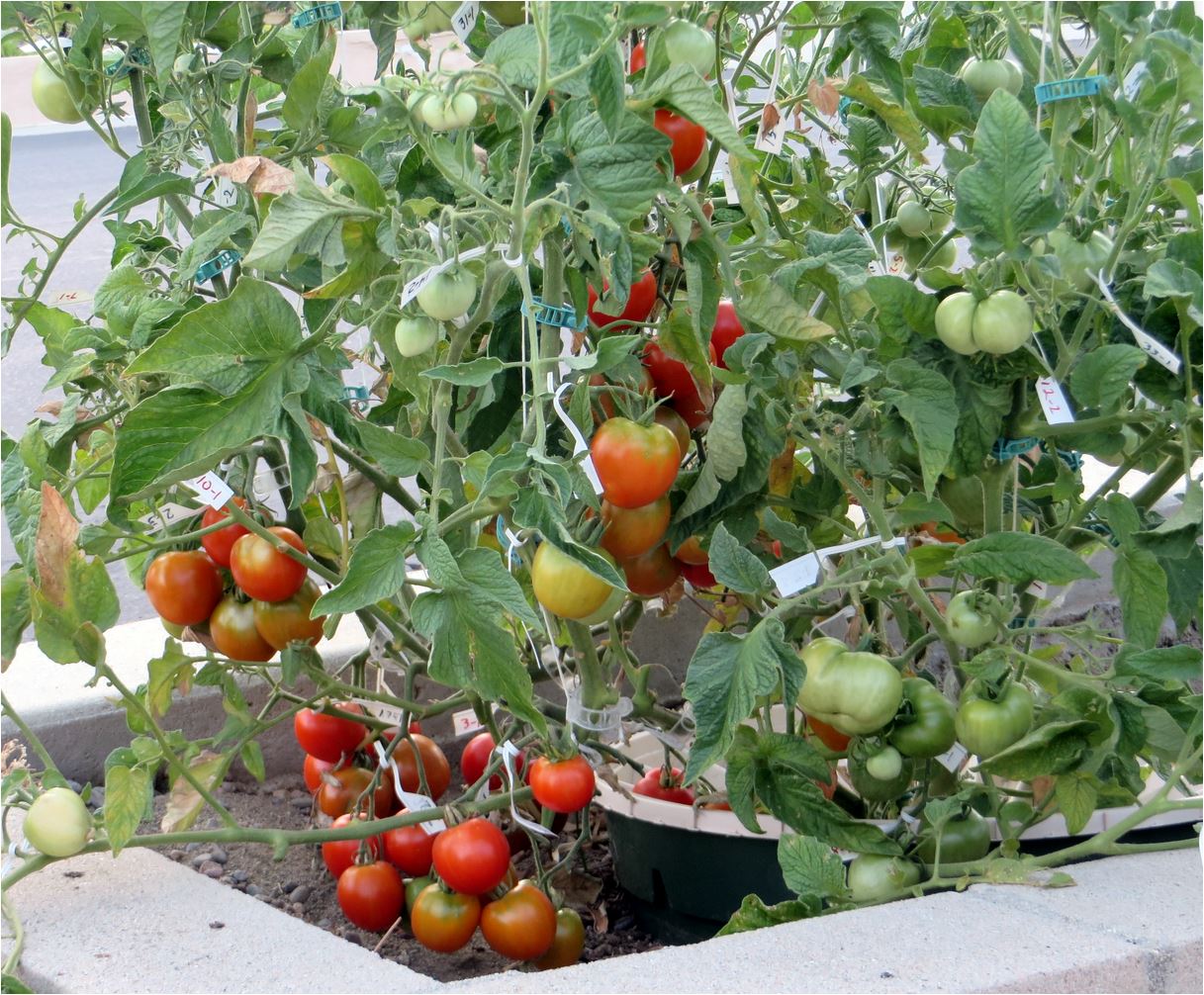 With the new 30% shade cloth, Bill hopes that both plants keep producing tomatoes until fall. Both varieties are, it seems, adapted to grow and produce a good harvest of tomatoes anywhere in the world. Trials have demonstrated that they tolerate both cold summers - setting fruit early - and hot summers – as per the one Bill is experiencing now. He is very proud of his trellis design, which measures 7 feet (2.1 meters) tall and has 3 horizontal bars that support the plants. Using his trellis, the plants have 12 square feet (1,1 m2) in which they can grow vertically. 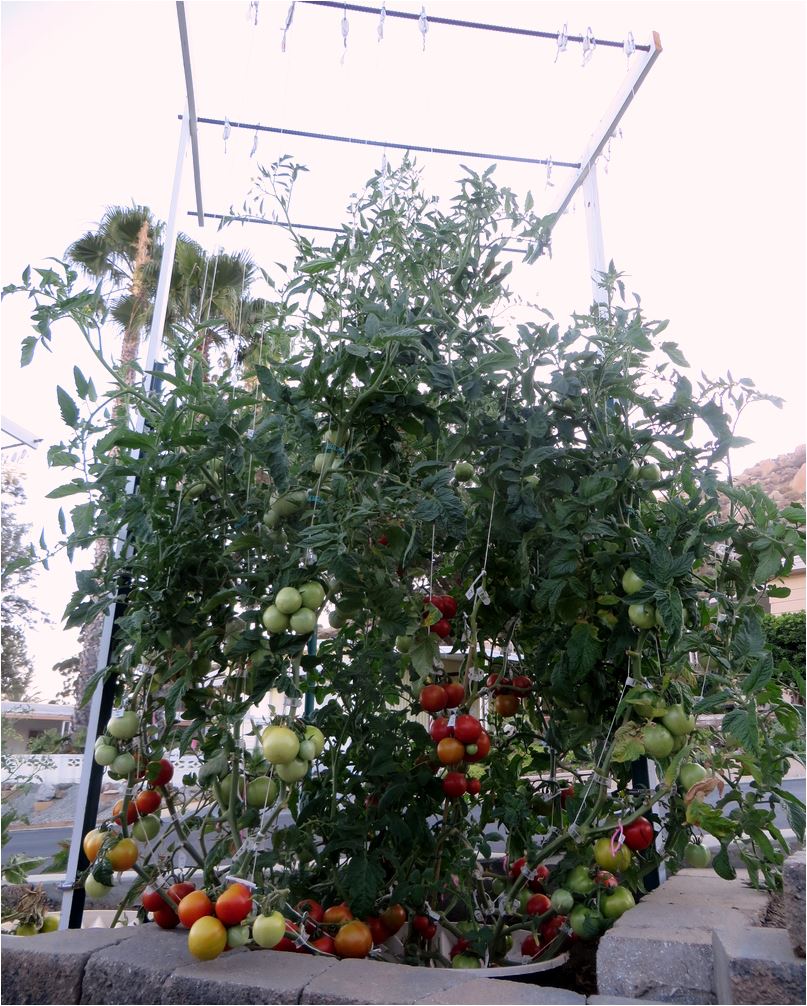 ‘’If somebody tells you they harvested more than 50 lbs. of tomatoes from a single plant, take it with a grain of salt. I can tell you first hand that is a BIG harvest from a BIG plant.’’ – Bill McNeese 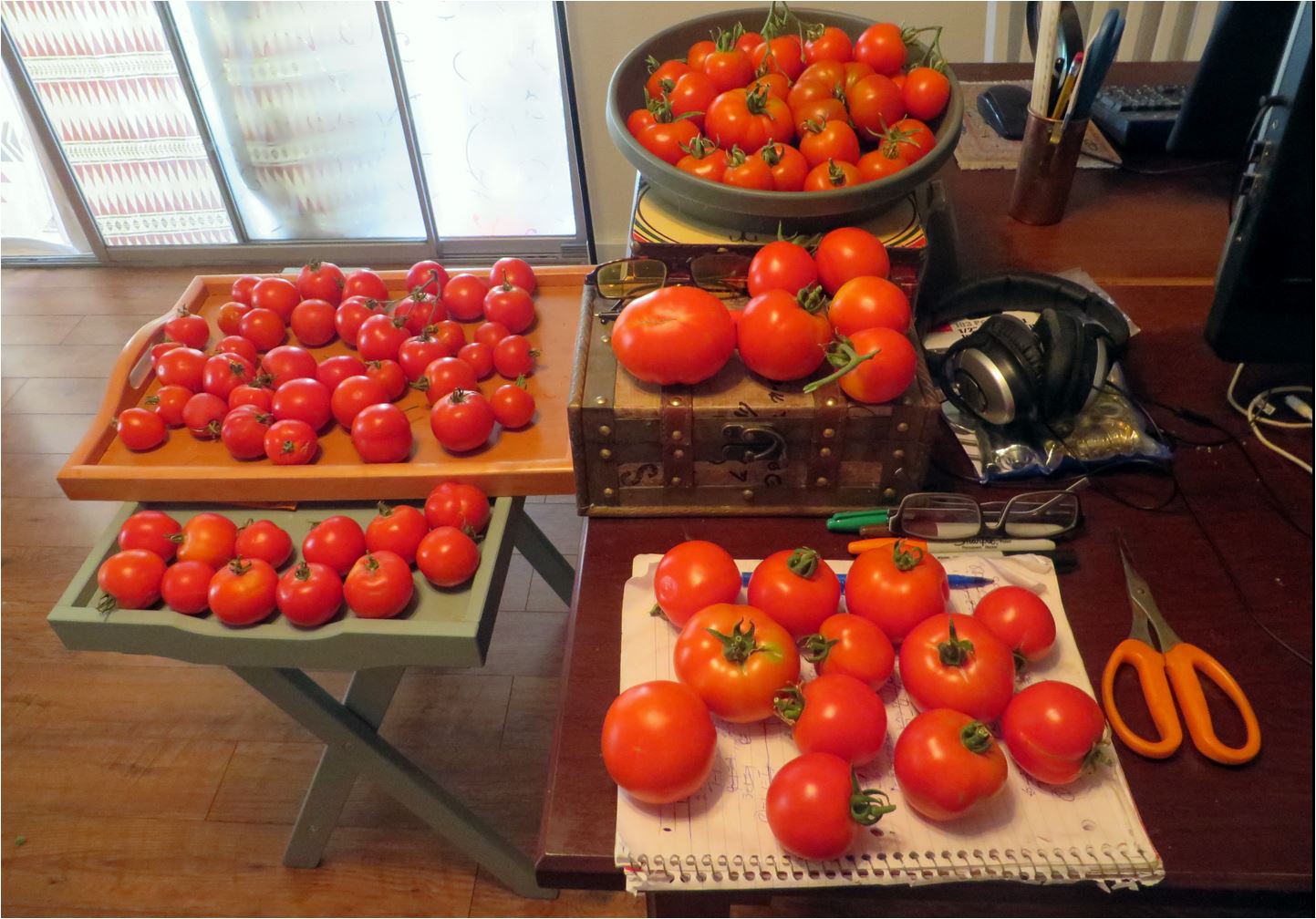 “The indoor photo shows I have been busy picking and weighing tomatoes. I have several neighbours now who wait for me to give them tomatoes.  And my wife makes good use of the rest.’’ – Bill McNeese

The next two months will be the hottest part of the summer. It will be an interesting time in the garden. The plants only get rainwater from Bill’s 55-gallon (208 liters) collection barrel. The wicks of the Waterboxxes® are still working. Bill is using about 1.5 to 2 gallons (6 to 7,5 liters) a week per plant.

Variety 1 - Early Girl: Bill picked a total of 1.8kg fruit on the morning of August 7. The quality is good, but the fruit sizes are getting smaller.

On February 8, the Stupice tomato plant is still alive in the Waterboxx® plant cocoon. Last winter, he has 6 freezes so far and the night temperatures were consistently in the 30’s and 40’s (Fahrenheit) since mid-November. Regardless, this heirloom plant still sets fruit and even ripens it on the plant. That is not supposed to happen. Bill doesn’t know any other variety that can do this. The plant tolerates heat well even though production drops off when temperatures stay steadily above 95˚F (35˚C). The heat doesn't damage the plant's root system or production power as long as Bill uses the Waterboxx® plant cocoon. When the weather cools down, it takes off setting fruit again. That's important to remember, don't count the plant out just because you get flower drop in very hot weather.  All tomato plants Bill knows of do that.

If you happen to live in an "perfect" tomato growing climate (few of us do) or if you can grow in climate controlled conditions (greenhouse), Bill believes the plant can is capable of much more than 60 pounds of fruit. This year he'll try to find a way to demonstrate it. What he has learned/finally gotten through his head is that, because of our blistering summers, he is far from having an ideal climate for growing most veggies, tomatoes included. Nevertheless, the Waterboxx® plant cocoon makes it possible to get good results, due to outstanding care of the root system.

The latest harvest of the Early Girl was in September 2016. The heat seemed to finally exhaust the plant. The total harvest was 61.50 lbs (28 kg).

Night temperatures are getting back in the high 40’s (1 – 4 degrees Celsius). If the plant remains healthy, Bill is curious how many more months it will go. With all the rain and cold, he had some problems with fungal spots on the leaves. He cut off and disposed the infected leaves. The fruit keeps setting.