Saplings are young trees. They can be produced in various ways:

In general, seed produces plants that are variable in genotype and phenotype:

In short, we can say that variable populations of plants differ externally in how they look and differ in their capacities - like growth, resistance, fruit production, etc. Populations grown from seed are far more resistant to diseases for two reasons:

Multiplication from one plant to a population of many. This can be done through the traditional way of cutting and re-rooting, or through tissue (vitro) culture multiplication. With these methods, all plants have the same genotype and phenotype. Through selection of the mother plant we can choose a plant that has extra capacities like more production, stronger growth, etc. But they are also very vulnerable to diseases to which they have no resistance. Once attacked, the whole population can and often will die. 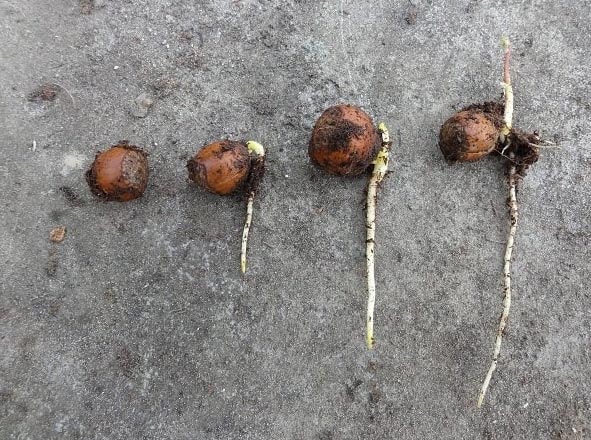 An acorn with a single root in the different growth stages

When producing saplings on plugs through seed, a very strong radicle root will be formed. Once growing, this radicle is able to break through even rocks. This is possible because the radicle of a tree is able to develop pressure over 50 bar (=750+ psi)!  Look at the image of the seed of the oak (acorn). The second seed on the left is breaking open by the radicle root. At the seed on the right, you see the strong radicle which looks like a nail just a few days old. By putting cuttings on plugs, a radicle is also formed, but it is weaker than a radicle developed from a seed - its growing point is mostly divided between a few weaker roots rather than one strong one. If we multiply saplings using seeds or cuttings in a plug, we prefer a plug to have the following features:

Once you take the sapling from the plug, you should see white tips and an undivided radicle root. If the tips of the roots are not white, it means that they are infected with a disease like pythium or other moulds. It is also possible that the peat is too salted and the root tips have burned.

View the development of the radicle root in Mother Nature and find that the root mass is bigger than the plant mass.

During my investigations of roots, I have found that in more than 95% of the occasions, when people are planting trees or bushes, the roots used for planting are wrong. The reason is that they keep the plants too long in the pot; once the strong radicle root reaches the bottom of the pot, it splits into weaker secondary roots. There are also industries where the bushes are multiplied with the bare root system. In vines, for instance, growers multiply their plants in the full ground; and once they are harvested to be transplanted to their final planting location, the growers clean the roots (thereby destroying all the secondary roots) and cut the radicle roots back to 5-10 cm (2" to 4") - and so, destroy the radicle roots.

The current multiplication methods destroy the radicle roots - the roots that in nature, are able to penetrate deeply into the soil with their force of 50 bar (725 psi), and tap capillary water.  These same methods stimulate the development of secondary roots with their weak force of only 1 bar (14.5 psi). This means that the nursery industry is creating trees and bushes that are unable to grow without substantial help in dry areas. As a solution to this mistake, we use irrigation. This irrigation is needed not because plants are unable to grow in dry places, but because the plants have an inadequate root system.

There are a few other methods that until now, have not been much used with trees.