The first plant cocoon developed as part of the Groasis Ecological Water Saving Technology was the Waterboxx® plant cocoon. Our first plant cocoon allowed you to plant trees and vegetables in an efficient and water saving way. The Waterboxx® is made from polypropylene and can therefore be re-used for several years to plant multiple trees – as on average every year a new tree can be planted with it.

Of course, the Growboxx® plant cocoon can also be used on fertile land, where generally speaking it leads to quicker growth, increased biomass and even higher survival rates.

What can the ‘intelligent bucket’ do? 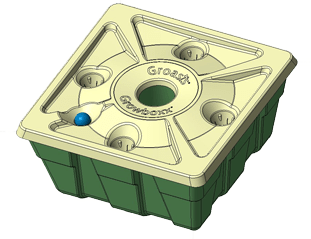 The design of the Growboxx® plant cocoon. Click on the image to enlarge.

How can the Growboxx® plant cocoon be used?

A farmer in a developing country can use the fruits to feed his family or sell the fruits to others. With the money that he saves or earns can he buy a new Growboxx®. The tree will be big enough after a few years to give fruits. The Growboxx® thus doesn’t only provide a short-term benefit, but also long-term advantages!

The Growboxx® plant cocoon can also be used for ecosystem restoration, reforestation projects or landscape planting in cities. Companies, governments, or other authorities can use the Growboxx® plant cocoon to green cities against air pollution, plant trees in combinations with shrubs in burned forests or plant of eroded areas with productive trees to produce wood, medicines or rubber.

Plant trees in an economic way

Testing of the Growboxx® plant cocoon

Groasis has already planted nearly 10.000 Growboxx® plant cocoons in over 30 countries. The tests were promising and we used the results to further improve the design of the box. At the end of 2016, the latest design was ready and the first million boxes were sold for a project that will be carried out by the Mexican State of Baja California.

Start your own project with the Growboxx® plant cocoon

Here you can find the documents for starting a project with our Waterboxx® plant cocoon.

Photo series of the LIFE+ The Green Deserts Projects in Spain