''A Green Musketeer plants one tree per year''. What if you want to plant a tree, but you don't have the space or opportunity to do this? Let us plant a tree for you! In association with the Sahara Roots Foundation, we have started a donation project. In October 2017, the first 10 donation boxes have been planted in the Saharan Desert in Morocco. Below you can read the blog of Wanda Hebly, founder of the Sahara Roots Foundation.

Armed with 20 Goasis Waterboxx® plant cocoons of which 10 had been donated through the Groasis Projects, we were on our way to Morocco to once again participate in the Environmental activities during the 8th Edition of the Taragalte Festival on 27, 28 and 29 October 2017. A year had passed since we were in M’hamid and we were anxious to see how the trees, shrubs and plants were growing on the site of the proposed Joudour Sahara Music School.

We had planted 48 Waterboxx® plant cocoons during the 7th Edition of the Taragalte Festival in October 2016. This had been a strenuous job. With the help of Habib, our tree-caretaker and his family, we had dug 3 wadi’s by hand with shovels, since tractors or digging machines were not available to us. This was an experimental project in which we would combine different techniques and the knowledge of the local farmers. Holes were also dug in the wadi’s in which we could place the Waterboxxes. We wanted to explore the use of these trenches in water catchment: trying and gathering as much moisture as possible in this harsh and dry environment, and not rely on water taken from the well or water tank. 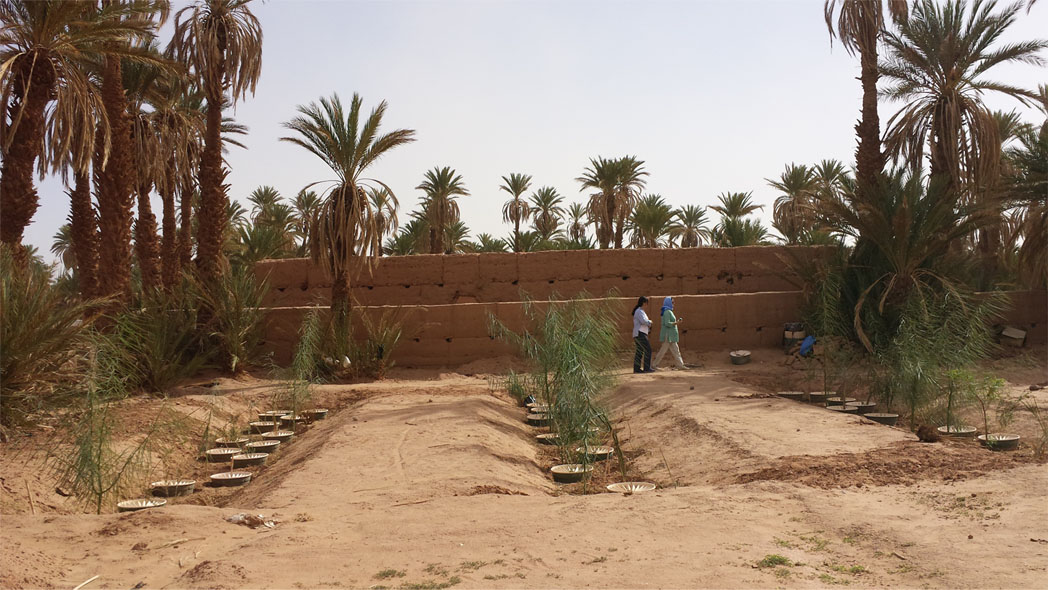 Once we reached the site, we were pleasantly surprised! Exactly 1 year before we had planted olive trees, palm trees, parkinsonia, bougainvillea, acacia, rosemary, jacaranda, pomegranate and pepper trees in the Waterboxxes and we were so happy to see that most of these had survived the long hot summers with temperatures up to 60°Celcius. Some of the Parkinsonia were 2 meters high! We evaluated the difference between those trees/shrubs/herbs planted in Waterboxxes and those without. Most of the young trees in the Waterboxxes had survived, those outside the Waterboxx had died. But, they would provide precious nutrients for the trees now growing. The Waterboxxes had been taken away from the Parkinsonia as after 1 year these are now strong enough to survive without. Together with Habib, we decided to leave all the other trees and shrubs in the Waterboxxes for 1 more year hoping to increase their survival rate.

Two more wadi’s had been prepared in February 2017 and 15 palm trees (of 4 different kinds) had been planted by students of Essence College, The Netherlands, during their visit and stay in the desert. Most of these had survived and those who had not, were replaced by Habib. We asked Habib to also place Waterboxxes over these palmtrees to help them to survive.

On the 3rd day of the festival, a group of local children, artists and visitors joined Halim Sbaï, director of Taragalte Festival, for a tour of the oasis. As we left the bivouac, the Waterboxxes and trees were loaded onto a donkey cart to be transported to the area in which they would be planted. We had purchased some of the trees in Ouarzazate on our way to M’hamid and others were given to us by the Ministry of Forestry and Environment in Zagora. A water tank had been placed on the site as well as, because there is no access to water there.

As we walked towards the site, Halim explained to the visitors that this was the last oasis along the Draa River (which was now dry in this area) before the dry riverbed continues on through the desert and eventually reaches the Atlantic Ocean under Agadir. Because of the shortage of water in this area, trees are dying and desertification is a real threat to the remaining villages here. The younger generation is moving away and sand is slowly taking over the agriculture land and over the rammed earth houses. The big question is “How can we turn the tide?”. By listening to the village elders and by integrating their knowledge with new techniques we hope to make a difference with our small “pilot project”.

So, with the knowledge of the elders, with the Groasis Waterboxxes, and with Permaculture techniques such as wadi digging, we hope to create a small divers, green oasis' within the existing oasis as an example of what can be done to fight desertification and to show that not all is lost.

By building green walls of Tamarisk trees we can protect the agricultural fields. By bringing in different kinds of trees/shrubs and plants we can help add nutrients to the soil and create an healthy environment in which surviving trees can grow. By sharing knowledge we hope that the younger generation will also come to appreciate their beautiful but fragile environment and create a sustainable way of living in this part of Morocco where their “roots” lay. With this in mind we planted the trees that we had bought with us in the Groasis Waterboxx® plant cocoon, including those donated through Groasis and those directly donated to the Sahara Roots Foundation.

The name tags of the donators

Visitors present at the festival had also donated and were able to  plant their own trees in a Waterboxx® plant cocoon. We planted 20 Waterboxxes  and added the nametags, while the children of the Joudour Sahara Music school played music in the background. These children are the future of this area and we felt very privileged to hear them sing, play and laugh during the treeplanting activities in this beautiful area on  the site that one day will hopefully be the Joudour Sahara Music School, Insha’allah.