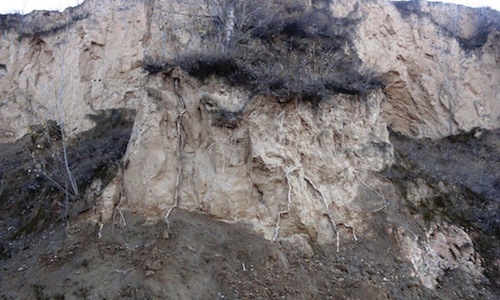 The darker the soil, the more capillary water you can find here. The tree 'drinks' the water through its tap roots.

In soil, there are millions of vertical channels - pipes - these are called "capillary tubes". Whenever there is a downpour, excess water runs underground through these capillary tubes. When it is dry, these same tubes transport water to the surface. Trees have their roots in these capillary tubes - which also contain threads of fungi which are hygroscopic (attracting water); and with their lateral roots, they soak up capillary water when it is hot and dry. This is how a tree survives heat and drought. Even in rocks, minuscule and invisible fissures function as capillary tubes.

Look at the animation to understand the capillary principle better.

The problem is not the lack of precipitation, but the time it falls. In some locations, it rains for 1 month, and it remains dry for 11 months. If the wet period is too short to allow the young roots to reach capillary water, the sapling (young tree) dies. If the wet period is long enough, and the roots reach capillary water, the sapling can survive.

If we look at rocky locations (e.g. the Alps, the Rocky Mountains), or at savannas (e.g. Mali, Mauritania), then we see that enormous trees can easily grow there. Even above entrances to tunnels (e.g. the Dutch Coentunnel, the Dordtse tunnel, and the Maastunnel), enormous poplars can easily survive prolonged periods of drought, as during the summer of 2006. The soil is only six meters deep, and there is a tunnel below. Rocks or temporary drought pose no problem for trees which use their leaves to absorb condensation water. This is certainly no problem when the roots have already grown to the depth of the capillary water.

Nature can form her own environment with capillary water 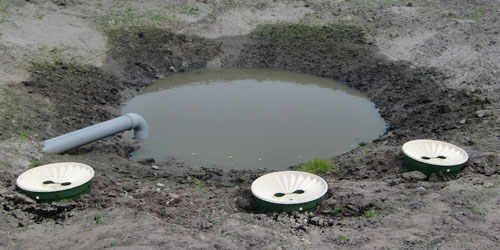 If we supply the required amount of water during the early stages – when a tree is still young and its roots have not grown deep enough to reach capillary water – then trees can grow virtually anywhere. In addition, a forest creates by itself, the right conditions to stimulate and aid growth. Trees create a different and unique microclimate where they grow - i.e. they provide shade for other plants; they attract animals which distribute seeds; the soil becomes looser and richer, and it receives organic matter which is better able to hold water and nutrients. An environment slowly forms in which many different plant and microscopic species can grow. Nature has always done this without our help - changing bare rock into rich soil.

How to prevent the loss of capillary water through evaporation.

The best technique to keep capillary "hang'' water in the soil, is to add a layer of loose surface soil.  During the day, capillary water evaporates because of the sun's heat hitting the soil. At night, the soil is warmer than the air; and so, the water evaporates. You can see this in two photos taken after a small test, which proves this phenomenon. The best way to stop this evaporation is by protecting the capillary column by putting a small layer of loose soil on top. 50 Years ago in Holland, when there was no irrigation, growers used an old technique to loose the top layer. This technique combined maintaining the humidity with weed control. The instrument they used for this purpose was the ‘roller scraper’. See here the loss of water from the soil, and the technique used to prevent it.

Here you can see a video on the roller scaper technique