As temperature falls, air shrinks (becomes more dense), which ultimately produces visible water.  Mostly we see the same result - water on leaves; but the cause of it is very different: 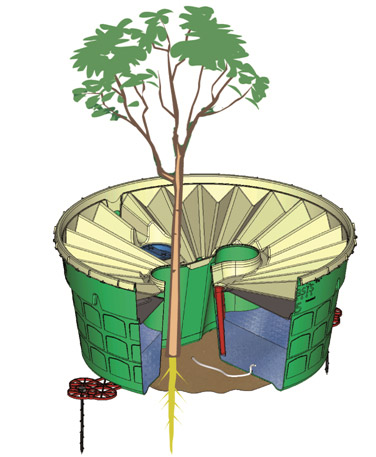 The Groasis Waterboxx plantcocoon® (see the image on the right) looks simple, but the plastics and design are specifically selected and technically very important. First, the plastic used has a very high "specific heat capacity", which allows the material to absorb a lot of heat; Second, it has a low "thermal conductivity", which prevents too much movement of the heat (stays cooler, longer) already absorbed by the Waterboxx plantcocoon®.

air, the dew point is more quickly reached and condensation can occur. Every day, this subtle design feature adds to the resevoir. And so, while to humans these plastics do not appear to be important, to the plant, they can be a matter of life and death.

Additionally, the Waterboxx plantcocoon® cover has a surface like that of a lotus leaf; this was a purposeful design feature. It mimics the Lotus flower's very high water repellence (or superhydrophobicity - i.e. "difficulty to wet").  Additionally, to mimic the papillae on the epidermis of the lotus plant, the Waterboxx plantcocoon® has 1000's of tiny pyramids which reduce adhesion and encourage the ultimate condensation and capture of valuable moisture from the surrounding air.