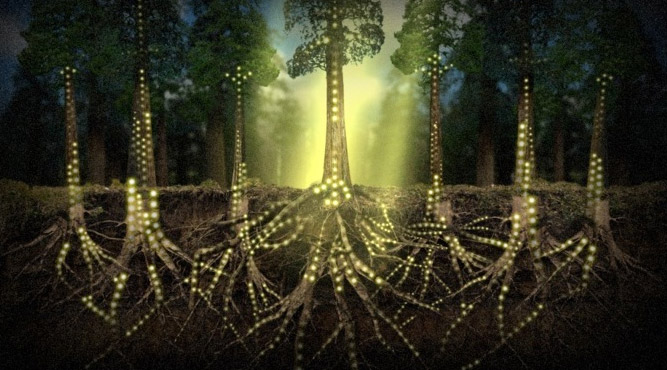 Hidden beneath the surface and entangled in the roots of Earth’s astonishing and diverse plant life, there exists a biological superhighway linking together the members of the plant kingdom in what researchers call the “wood wide web”. This organic network operates much like our internet, allowing plants to communicate, bestow nutrition, or even harm one another.

The network is comprised of thin threads of fungus known as mycelium that grow outwards underground up to a few meters from its partnering plant, meaning that all of the plant life within a region is likely tapped into the network and connected to one another. The partnership of the roots of plants and the fungi is known as mycorrhiza and is beneficial for both parties involved; plants provide carbohydrates to the fungi and in exchange, the fungi aids in gathering water and providing nutrients such as phosphorus and nitrogen to its partnering plant.

This fungal network has been found to allow plants to aid one another in growth and flourishing. University of British Columbia graduate Suzanne Simard was the first to show that trees such as the Douglas fir and Paper birch were capable of transferring carbon to smaller trees that may not be receiving enough sunlight, allowing seedlings to grow in the shade of other trees. Simard believes that many of the world’s seedlings would not be able to survive if it weren’t for the lifeline this network provides. 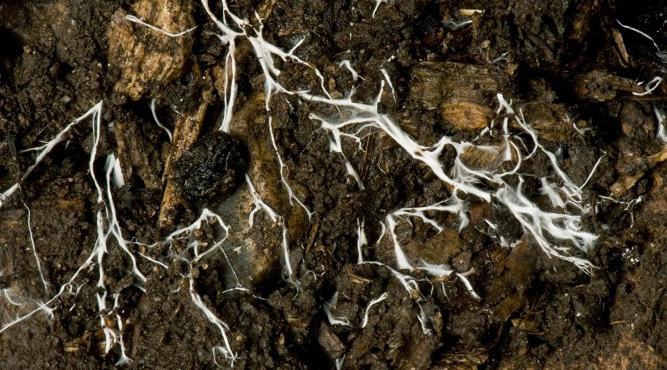 A study conducted by Ren Sen Zeng of the South China Agricultural University found that this interconnectivity also allows for plants to warn one another of potential harm. In the study, the team grew potted pairs of tomato plants where some of the pairs were allowed to form mycorrhizae. When the fungal networks had formed, one plant of each pair was sprayed with Alternaria solani, a fungus that causes early blight disease in plant life. Air-tight plastic bags were used to assure there was no above ground interaction. After 65 hours, the team tried to infect the second plant of each pair and found that those with mycelia bonds were far less likely to contract the blight and had much lower levels of damage if they did contract it than those with no mycelia.

A similar study was done by University of Aberdeen graduate David Johnson and a team of colleagues that showed Broad Beans also utilized the fungal network to eavesdrop on one another for impending danger. As hungry aphids fed on the leaves of one of the Broad Bean plants, the plants connect via mycelia began to excrete their anti-aphid chemical defenses, while those that were not connected had no reaction.

"Some form of signalling was going on between these plants about herbivory by aphids, and those signals were being transported through mycorrhizal mycelial networks." -David Johnson 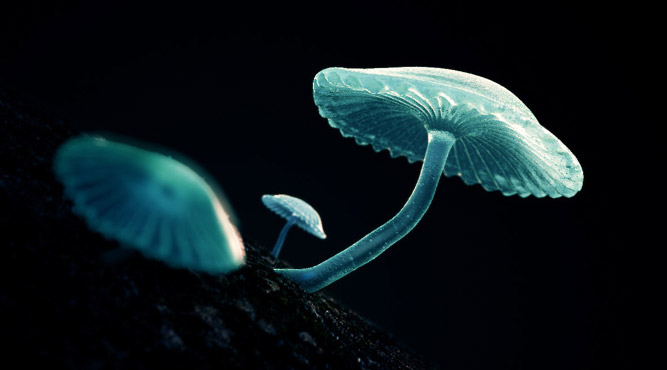 Like our internet, this fungal connectivity is also susceptible cyber crime, terrorism, and even warfare. Some plants, such as the Phantom Orchid, do not have the chlorophyll necessary for photosynthesis and must leech the necessary nutrients for survival from surrounding plants. Other plants, such as Golden Marigolds and American Black Walnut Trees have been found to release toxins into the network to hinder the growth of surrounding plants in the fight for water and light.

Some research suggests that animals such as insects and worms may be able to detect subtle exchanges of nutrients through the network, allowing them to more easily find savory roots to feed on; however, this has never been conclusively demonstrated in experimentation.

"These fungal networks make communication between plants, including those of different species, faster, and more effective. We don't think about it because we can usually only see what is above ground. But most of the plants you can see are connected below ground, not directly through their roots but via their mycelial connections."
-Kathryn Morris

The more we learn about this phenomenon, the more our understanding of the plant life of our planet will continue to change. Perhaps one day, we may be able to peacefully map out these complex fungal networks to appreciate them in their entirety.