This document describes other important financial aspects that influence the economical return of your project:

Suppose you buy a car for 1,000 Euros. That is your investment. Suppose the quality is so bad that you can drive only 1,000 kilometres until it collapses. Your costs per kilometre have been 1 Euro. Now suppose you buy a another car for 20,000 Euros and that you can drive 200,000 kilometres with it. Your investment is 20 times higher, but your costs per kilometre are 10 times lower: just 10 cents.

Survival rate is a critical factor

The reality, however, is slightly different. The survival rate of the trees also impacts your costs per tree.

Let’s assume that in Scenario A your survival rate is 30% and in Scenario B it is 90%. These figures are based on the biggest experimental plantations ever with the Groasis Technology: the Life+ Green Deserts project. They are organized by the University of Valladolid in Spain and financed by the European Community. For background information click here.

The survival rate of the trees you plant has a significant impact on the real costs per surviving tree. The Groasis Technology at looks to be more expensive at first sight, but proves to be 29% cheaper in use, caused by the high survival rate it ensures.

Replanting costs, visualized in a different way
The costprice of a tree (and the duration of planting as part of the total project duration) is heavily influenced by the cost of replanting those trees that have not survived. The table below shows the effect of replanting costs in Scenario A, with a 30% survival rate. If you have space to plant 3,000 trees and the average survival rate is 30%, then it will take you 7 years before you have the same amount of living trees when compared to planting with a method that gives you a 90% survival rate. In total you have to plant 9,000 trees in order to get 2,700 trees that survive.

Damage caused by non-survival and reduced growth speed
The photo below shows a plantation of the EU-subsidized “Life+ The Green Deserts” project in San Mateo-Zaragossa in Spain. The left and right rows consist of trees which have been planted with the Groasis Waterboxx plantcocoon®. The middle row has been planted without help. The photo shows not only the lower survival rate of the trees which have been planted without the Groasis Waterboxx plantcocoon®, but it also shows that these trees are approximately 75% smaller.

This means that using a planting technology that doesn’t give you reliable results may not only lead to lower survival rates (= high replanting costs) but also to missed revenues (timber, crop, carbon credits et cetera) after several years.

Missed revenues caused by non-survival
If a tree doesn’t survive, it also doesn’t provide a crop later in the project (unless it is replanted but then it will give you revenues later). We use the example of the 3,000 trees in Scenario A again. Assume each tree gives a crop of 25 kg  in year 5, 50 kg in year 6, 75 kg in year 7 and 100 kg in year 8, and let’s assume that each kilo of crop can be sold for 0.50 Euro, then the missed revenues (versus Scenario B: planting with the Groasis Waterboxx plantcocoon® and 90% survival rate) are 157,354 Euros over an 8 year project. Using an inferior planting method causes nearly 60 Euros less revenues per surviving tree, caused by a lower survival rate. Missed revenues caused by non-survival show to be even more important than the cost of planting itself. 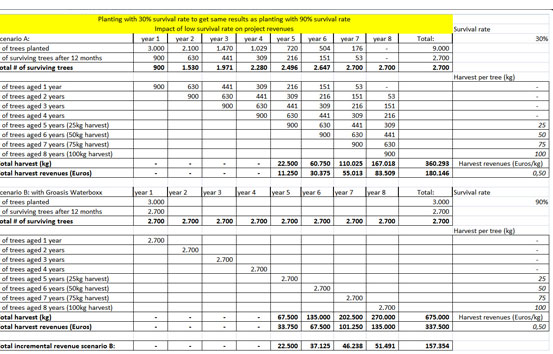 Missed revenues caused by slower growth speed
The same discussion is valid for a low growth speed. If your trees grow 50% slower, then your crops are 50% smaller. The difference in revenues speaks for itself.

High variable and fixed costs continue
Maintenance costs while growing are an important factor. The non-survival rate and slower growth speed cause important negative effects on the cost price of the produced product. Even though the survival rate may be 30%, you still have maintenance costs for 100% of the project. You still have to take out weeds, spray fungicides, herbicides, insecticides, pay your organizational costs, et cetera. Many of these costs do not decrease whether you have a 30% or a 90% survival rate. If you have a 30% survival rate, your fixed costs per plant increase trifold.

Eco-restoration with the Groasis Technology will in general be approximately 29% cheaper because of the high survival rate.

Social costs – water use
This paragraph serves only to make you think more about the social aspects of agroforestry and water use. The use of drip irrigation is very inefficient. On average growers use approximately 15 liters (4 gallons) of water per day per plant. This is not used year round, but especially during the warm season. In general we can say that this water is added during approximately 100 days per year. This means that drip irrigation on average uses 1,500 liters of water per tree per year, eternally. The Groasis Technology uses in the first year 60 liters per tree. From the second year and on it uses 0 liter – because the roots of the tree have grown strong and deep and the tree has become self-sufficient. If a country has sufficient water it might consider to use drip irrigation for agroforestry. If it has not sufficient water, or if underground water levels drop, one may ask the question whether it is smart, or ethical, to use drip irrigation if the efficiency of the water use is so low compared to the use of the Groasis Technology. As for the use of drip irrigation in cities, Groasis thinks the answer to this question is clear: it is not smart neither ethical to use scarce ground water for beautification purposes while in the same time there is an alternative – the Groasis Technology - that uses no water.

Conclusion
The conclusion of this document is clear: the cost of planting, either done without or with a supporting technology, are not really important. The real costs of the planting of trees are caused by the survival rate and missed revenues. A planting method like the Groasis Technology  that results in a high survival rate and fast growing products, is far ‘cheaper’ than a risky planting method where survival depends on having a wet spring or a cooler than normal summer.