The Groasis Waterboxx® plant cocoon has an open center in an eight-shape.  The advantage of this eight-shape opening compared to the rounded opening in the Groasis Singlebox, is that it stimulates natural assimilation by the plant. How does it work?

The Waterboxx® plant cocoon eight-shape opening must be placed in an east-west direction.  While rising in the east, the sun is able to shine its light throughout the length of the eight-shape opening.  The sun is thus able to shine more light into the opening compared with a rounded shape.  During the day the sun climbs to its highest point, and is at a 90 degree angle to the eight-shape opening.  In this way, the opening gives shade to the plants equal to the rounded opening.  In the evening when the sun sets in the west, again its light enters the length of the eight-shape enabling more light to shine in.  A compass on the cover helps the planter to orient the Waterboxx® plant cocoon in the right direction.

The eight-shape allows more light to enter when the intensity of the sun is low – in the morning and the evening – and gives relative shade at noon when the intensity of the sun is doing most damage to the plant. In this way, the opening prevents damage during the hottest part of the day; and by allowing in more light in the morning and evening, stimulates the plant's natural assimilation.

Look at the images to see how it functions.

The Waterboxx® plant cocoon doesn’t only stimulate assimilation but also the germination of seed.  If you are planning to use seeds or nuts instead of a sapling, the germinating seed will receive moderate sunlight each day in the morning and evening. This will stimulate germination while limiting drying out due to the shadow at noon provided by the eight-shape design.

Another advantage of this design is that the leaves of the sapling or the just germinated seeds, will be hardened by the sun.  They will become stronger by receiving sunlight in the morning and evening when its light is less damaging - thus fostering hardening and stimulating assimilation.  This design also prevents the very young leaves from burning during noontime.

Sometimes young plants need physical support. The eight-shape opening offers space to plant one plant on one side and a supporting pole or stake on the other side. 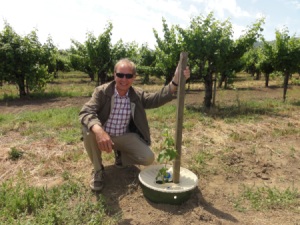 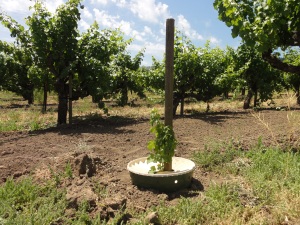 The eight-shape opening has even more advantages.  It allows the user to make a choice planting 1, 2 or 3 plants!

This is interesting for a grower who wants to plant vegetables on very dry places or during draughts - for example, corn. Once the corn has germinated and is around 20 cm (8") high, the Waterboxx® plant cocoon can be taken off and used for the next planting. In this way, the grower is able to plant a higher number of plants annually with one box, which lowers per plant costs.

In some tests with plants, it seems that there is a so-called ‘positive competition’ effect. This means that if two plants are growing together in the small place, both start to compete to grow faster than the other. This stimulation of growth can be of significant importance if we plant trees in arid circumstances. Their ‘survival of the fittest’ reaction will probably help them to grow faster and healthier. More tests will help us find out if this effect really exists - how big the effect is, and if we can use it as a strategy to plant trees in deserts and help them survive and grow better.

As each person is different, each tree is also different. Even vegetatively multiplied trees – i.e. clones – have different qualities and capacities.  Some of these differences strongly influence the tree's yield

Both reasons cause a difference in growth after the first year. This difference can vary between 10% - 100%.  One of the two planted trees is surely stronger and taller. So, if a grower plants e.g., 500 trees/hectare, he has the option with the Waterboxx® plant cocoon to plant 500 x 2 trees.   After the first year, he can take off the box and at the same time, cut the smaller or weaker of the two trees. In this way, his production is from the 500 strongest of the 1000 originally planted trees.  This way of planting can easily produce over the longer term, an increased yield of 10 - 25+%.

The double planting system gives a higher probability of 100% planting success, and a positive selection of those plants with the best genetic growth capacity.

This document allows you to calculate that planting a double number of saplings to combat desertification has little effect on the cost side, and shows that harvesting greater or fewer trees per hectare has an extreme effect on the return of investment (ROI).

2 Plants = 2 trees of the same variety

In most wood production plantations, there are too many trees planted per hectare.  This conclusion comes from an analysis that trees are often planted just as farmers planted corn in the beginning of the 19th century.  In that period, corn was planted (i.e. sown by hand) with irregular distribution on the field.  In the beginning of the 20th century, corn farmers in the developed countries found that planting corn in rows stimulated production of much higher yields.  Currently, farmers in developing countries with 12 months of sun and no winter, who sow seed irregularly by hand, have a yield of around 20 tons per hectare.  Farmers in Northern Europe and the United States with 6 months of sun and a winter period, who sow in rows at 50 cm (20") intervals (!), have a yield of 100 tons per hectare.

How is this possible?

See the images that explain how the Groasis Waterboxx® plant cocoon lets the sun shine on the plants in the early morning and the late afternoon, and gives shadow and protection from 10AM to 4PM.

Trees should therefore be planted in rows and at such an interval that sunlight is able to maximally penetrate to the trees' leaf surface.  Not only does this generate a much higher yield, it also gives much more opportunities for other plants to grow and survive on the ground.  Everyone knows that many modern woods have excessive concentrations of trees, and are monocultures with only one variety; this environment is detrimental to many other life forms - both flora and fauna. These monoculture conditions discourage diverse ecosystems, and encourage parasites with no natural enemies, which can ultimately cause the harm and even devastation of the entire woods.

Another interesting phenomenon: If you see a row of individual trees, and coincidently, instead of one tree, two trees are growing together, you may notice that the biomass of the two trees together is higher than trees individually despite having the same leaf surface.  Having noticed this phenomenon, Groasis will carry out tests in the coming years to test the following theory: planting two trees together in rows will produce a higher ROI than the same trees planted individually in rows.

The "eight-shaped" Groasis Waterboxx® plant cocoon allows the grower to plant 1, 2 or 3 plants.  Some of the advantages are:

All of these advantages make it interesting to use the Groasis Waterboxx® plant cocoon with the "eight-shape" multiple opening instead of a box with only the traditional "circle-shape" single opening.