Dutch National Icon* finalist Groasis is going to save 700.000 residents in Mexicali from future sandstorms

The Groasis Ecological Water Saving Technology is going to change the lives of the residents of Mexicali, the capital of Baja California in Mexico. The Groasis Ecological Water Saving Technology will be used to plant a 180 kilometres long section of trees, in collaboration with the Mexican State and Legado Verde, to shield the residents from the fierce sandstorms that frequent the area. Legado Verde is a Mexican company working with the latest methods of infrastructural landscaping projects of reforestation, city greening, airport plantations and along highways and streets, without using drip irrigation.

The trees will be planted in 2017 and will serve as a 180 kilometres long “curtain” that helps reduce the amount of airborne particles that cause pollution and nuisance. Governor Vega de Lamadrid states: ‘’The windshield of trees will increase the quality of the life of residents of Mexicali, in the near future and for many generations to come’’. Baja California is very ambitious with its greening program. In addition to planting the windshield, two thousand hectares (nearly 5.000 acres) of burned forests in the Sierra de Juarez will be restored using the Groasis Ecological Water Saving Technology. If the restoration is successful, another 8.000 hectares are foreseen to be planted from 2018.

The trees will be planted with the help of the Growboxx® plant cocoon. Pieter Hoff, the Dutch inventor of the Growboxx® plant cocoon and the Groasis Ecological Water Saving Technology says: ‘’The Growboxx® plant cocoon is a biodegradable intelligent bucket made from recycled paper that uses 90% less water than drip irrigation. In spite of these enormous water savings, we’re seeing a survival rate of the trees in excess of 90%. In addition to this, the box has a very unique feature: you can plant a tree in combination with four bushes, wildflowers or vegetables. This allows us to catch even more sand and other airborne particles and increase bio-diversity!‘’

As the survival rate is very high and water consumption very low, the planting costs per hectare with Groasis’ revolutionary technology are considerably reduced. Ecosystem restoration and air quality improvement (in cities) will be affordable for every government and costs a fraction of previously used technologies. In a few years the Mexicali citizens can breathe clean air again and enjoy a beautiful green space surrounding their city.

Driebergen, december 15, 2014 - On friday, december 12, 2014, the NCD (Dutch Association of Commissioners and Directors) handed out the ''Change Award 2014'' during the Change in Business Event. Groasis was one of the three nominees and won this ''Award of the Awards'' with the Groasis Growboxx plant cocoon®. According to the jury and the participants of the event, Groasis is a real ''Changer'' which shows that doing business with conciosness and positivism can go hand in hand with entrepreneurship.

By handing out the ‘CHANGE Award’, the NCD wants to focus on the value of real changes, but also wants to emphasize on the breakthrough innovations we have in the Netherlands, where we can be proud of. The Jury and participants of the Change in Business Event unanimously chose Groasis as the winner. Winner of the Change Award 2013 Bert van Son (Mud Jeans) handed out the Award. Groasis distinguished itself particularly by the simple but effective function and the impact that the invention has on a greener world. The other two nominees were Juice on Wheels and Spark Design with the Rescue Tip-board.

Tjebbe Will: “Winning the Change Award 2014 means recognition to us. More and more people get convinced that Groasis can really take steps to a greener world with the Growboxx plant cocoon®. In 2015, we really want to start with our Treesolution, and use the Growboxx plant cocoon® at places where plants and trees do not grow anymore, in order to achieve regional economic development and ecological restoration. The support we get from the NCD-members by winning the Change Award is very welcome”.

The handing out of the NCD Change Award is an important part of the NCD Vision on leadership, with the goal to blow a new, fresh CHANGE wind through businesses in the Netherlands. This is not a concrete goal, but a process to do business and work together in a conscious and positive way. Hereby, the NCD provides a platform to share new initiatives with each other, and bring them forward.

Last Friday the 14th of November, Accenture announced the winners of the Innovation Awards 2014. The Treesolution with the Groasis Growboxx plant cocoon® – judged by a jury of the 12 biggest corporates of Holland - has won the prestigious overall Green Tulip Award in the final in Utrecht, and can call itself the most innovative green product of Holland! Groasis and its founder and inventor of the Growboxx plant cocoon®, Pieter Hoff, is very proud and thankful for this recognition.

Pieter Hoff says: “with the Groasis Growboxx plant cocoon® we introduce an unimaginable easy tool to combat erosion through reforestation of degraded farmland”.

Groasis is successfully active planting trees in over 30 countries with extreme dry and hot climates. The Accenture Innovation Awards is an annual competition. The most innovative products, services and concepts, that deliver exceptional performance in the field of innovation and sustainability, compete for the coveted Green Tulip.

Note to editors
Download “The Treesolution” here. For information about the Groasis Growboxx plant cocoon® experiments, watch this video. For more information and images you can look at our press Kit Photos. 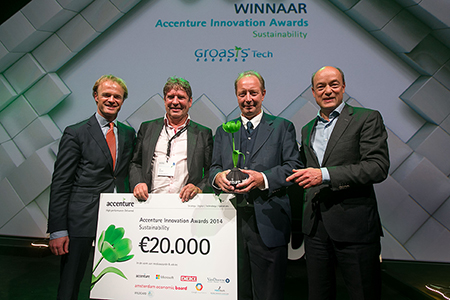