Together with Jeyson, who is an Argonomist Engineer, we started our activities in the WFP Pasto Office. We were received by Mario and Carmen Lucía. Beside them, we met the others of the office’s staff. Everybody was very kind, and we explained them how the Groasis Ecological Water Saving Technology works, and what you can do with the Waterboxx® plant cocoon (the concept, components, species planted).

After this, we checked the warehouse where 1,050 Waterboxxes and Growsafes were stored. Altogether we arranged the delivery of the boxes to Almaguer. 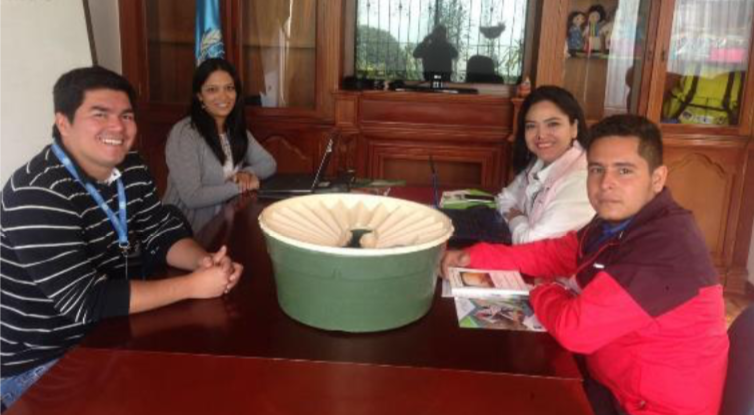 At the end of the afternoon, we bought a tomato Tahiti specie. We will use this for the video of tomorrow (Tuesday). We will be a part in the video that the World Food Programme will make about the different projects they have carried out during 2017.

We arrived at 08:30 at the office of the World Food Programme. While organizing our speeches and preparing ourselves for the video, various people from the press from Bogota arrived to film and to conduct the interview. They asked us about the Groasis Technology, what our plan is, and how we will help the beneficiaries in Almaguer. We hope to receive the video in March!

Ana, member of Groasis, during her interview for the WFP's annual video

The WFP team was very enthusiastic about the boxes, and asked to their supervisor if they could use a couple of them to test them in a very dry area around Nariño.

In the afternoon, the Waterboxx® plant cocoons were sent to Almaguer by a truck. The boxes will arrive tomorrow, in the same way as we do. It was a very long day, on Wednesday we will have a long trip to Almaguer by car (around 6 hours).

We arrived at 08:30 at the office of the World Food Programme. We started our trip to Almaguer immediately. We heard that the WFP office could keep a couple of the boxes in order to test them around Nariño.

The highway in Nariño Department is very good, but when you arrive to the Cauca side, it is a curvy highway with a lot of military and policemen in every small town. Almost 7 hours later, we finally arrived in Almaguer, where the truck with the boxes was waiting for us.

We could store the Waterboxx® plant cocoons in a room in the house of Osvilda, a woman who participates in this project. I used the rest of the day to prepare the brochures, information sheets, and the slideshows to explain how the technology works for the female leaders of AMURA.

Today we have started at the community house where we came together with members of the WFP and the female leaders of AMURA. Everything was very well organized, and looked great. We had a good welcome. Mónica from PNUD Colombia gave the opening. She has experience working on various projects with the women of AMURA and other groups of the Colombian Cauca. She is a very active and pleasant woman.

The socialization was a success. All the women are excited to start the project. In the Sprint project, 203 women from 13 different groups will participate.

While talking, Mr. Diego Bravo, representative of the Mayor of Almaguer, participated. He is a valuable support for this project. He has advanced knowledge of agriculture in this area, and he is very persuasive with the women of the association.

Additionally, we obtained a list of the species of trees and vegetables that would be planted with the Waterboxx® and the Growboxx® plant cocoon:

Next Saturday, we will have a new meeting with the 13 groups to define the final species to plant in the Waterboxx®, the distances for visits, schedule of visits, etc. 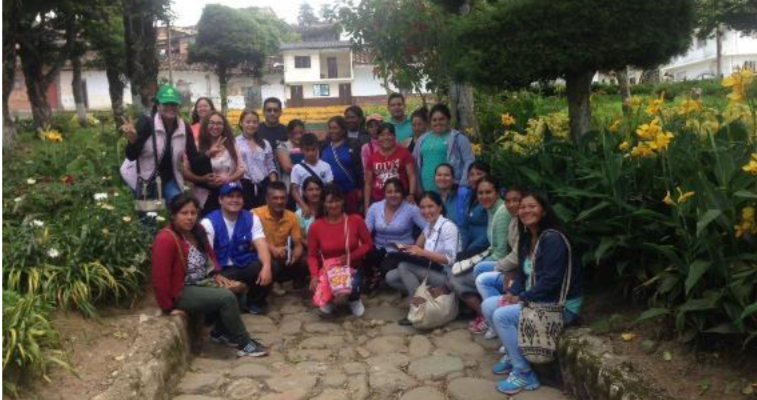 All together; members of the World Food Programme, representatives of the mayor of Almaguer, women of AMURA, and Groasis

Today, we started with a meeting with the female leaders of AMURA, Diego Bravo, and our own team. During this meeting, we came to the following conclusions:

We have numbered all the Waterboxx® plant cocoons for the 13 groups, and made them ready to be used. We received a message from the WFP, indicating that we must keep safe and don't go outside, since there will be an armed strike.

Monday and Tuesday, February 12 and 13

Since there was an armed strike (we have been in peace, only the bus service does not work), we were not able to carry out the activities that were scheduled for this week. The visits to the sidewalks have been modified, resulting in the following:

We have had a very busy day. Our trip started today at 4 am. We took the bus “Super Tambo” and went to Popayan. Popayan is a very big city, 5.30 hours far from Almaguer. It was a hot day, and certainly has a little smell like Guayaquil. We arrived to the bus station at 9.30 am and immediately went to the store. Over there, we met with Diego Bravo, who left Almaguer in a dump truck, provided by the mayor of Almaguer.

Avocado Hass - for more pictures of the saplings and the WFP project, please click here.

After this, at 1 p.m. we met with Mónica (PNUD Colombia), who invited us for lunch. She talked with us about an event next Tuesday 20th in La Herradura. It will be important, and the Groasis Project will be named in the event. Also, La Herradura is one of the places who is working with us in the Sprint project.

Around 2 p.m., we were in the nursery to take the trees with us. The nursery is very big and systematized. We visited the installations and we checked our trees. We placed the trees in the volqueta and left Popayan at 4 p.m. We were back in Almaguer at 9 p.m. It was a long day, but a good one!

We visited the place where we stored the trees. We recounted the plants and until Sunday, they will be watered. In the afternoon, we searched some mycorrhiza in the village. We chose for “Botón de oro” as mycorrhiza for the plantations.

From Monday 19 to Friday 23, we will carry out the plantations with the Groasis Ecological Water Saving Technology (with the Waterboxx®, the Growsafe and the mycorrhiza) at the sidewalks.