The CO₂ concentration in the atmosphere has increased from 280 ppm to 410 ppm since the Industrial Revolution. That is a measurable fact - and there is no denying it. Therefore, the discussion about whether climate change exists or not, is irrelevant. If we make sure that the CO₂ concentration reverts to approximately 280ppm, then the risk of climate change is gone (assuming that CO₂ is the cause of it).

What we see, however, is that governments, companies, interest groups, scientists and many so-called specialists fool their citizens every day. As a result, all sorts of measures are now being imposed on citizens, which will lead to enormous, unnecessary, costs whilst having only very limited effects.

The Dutch government has used the last year to negotiate and sign a Climate Agreement with these interest groups. Citizens have not been asked about their opinion. Citizens are only necessary to pay for these bad decisions. However, the whole agreement is based on measures that are supposed to lead to lower CO₂ emissions. This is called reduction. But if CO₂ really leads to climate change, then reduction does not help against climate change. Although less CO₂ is emitted, reduction only means that the concentration of CO₂ in the atmosphere rises more slowly. Climate change may therefore be caused less rapid, but it will not be stopped. The following graph illustrates this fact: 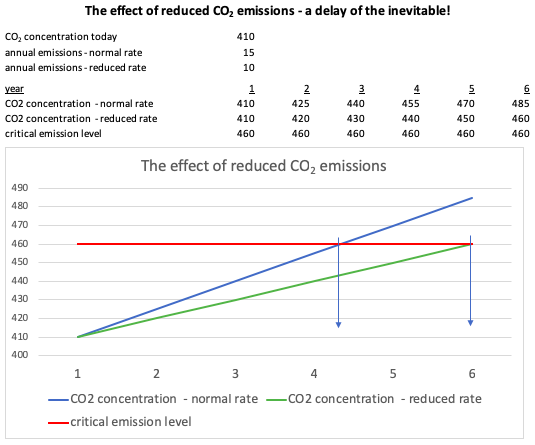 The decision makes should know that reduction of CO₂ emissions is not the right solution to prevent climate change, if CO₂ is the cause of it.

Every day that we emit more CO₂ in the atmosphere than earth can disconnect, the CO₂ concentration in our atmosphere increases. This means that citizens are being deceived. Reduction is not a cure, it is just a postponement of the possible catastrophe.

Does this mean that reduction is not necessary? No, reduction is certainly necessary, but it is only effective if the emissions of CO₂ are equal the CO₂ disconnection capacity of our earth.

This leads to our second problem: not only do we emit too much CO₂ - the increase of the concentration from 280ppm to 410ppm proves this - but we also destroy one of the most important instruments of earth which can reduce the CO₂ concentration: the tree. Every year, we deforest 12 million hectares of land. This means that despite the fact that we emit less CO₂ into the atmosphere through reduction, the CO₂ concentration will increase anyway, because the instrument that can remove the CO₂ pollution from the atmosphere - the tree - is cut down.

The conclusion is clear that the strategy chosen by UNFCCC - reduce mankind’s CO₂ emissions - is not enough to protect us from climate change - if the increased CO₂ concentration in the atmosphere is the cause of climate change.

There is only one way in which humankind can actually bring down the CO₂ concentration in the atmosphere: it is the tree.

Reducing the CO₂ concentration in the atmosphere is simple and cheap. A tree uses photosynthesis to 'eat' CO₂ from the atmosphere. A tree takes the CO₂ molecule from the air and disconnects it into one C atom (Carbon) and two O atoms (Oxygen). The oxygen goes back into the atmosphere and it supports life. The carbon is used to make wood, food and humus.

Here are the figures: each year we emit 34.5 billion tonnes of CO₂ because we burn fossil fuels. Trees disconnect 15 tons of CO₂ per hectare per year. So if we plant 2.3 billion hectares of trees, we disconnect all emitted CO₂. If we plant more hectares, we can even disconnect our historical emissions and clean up the atmosphere (bring down the CO₂ concentration back to pre-industrial revolution levels).

Look what trees can do for us:

I came to these conclusions when I wrote my book ‘The Treesolution’ several years ago. That is why I want to share these thoughts with you. If you want to know more about it, then download the book for free at www.thetreesolution.com.

My next blog will be about the differences in costs between The Treesolution and the CO₂ reduction policy. You will be amazed, because the Treesolution creates income, employment, wealth. It makes money instead of costing money. Taxes can drop instead of increase. Instead of suffering from the expensive climate change policy that is imposed on us by government and interest groups, we can all enjoy a better world if we implement the Treesolution to help prevent climate change.