The tree is a wonderful creation that enables us to solve the climate change challenge. Where man invented CCS - Carbon Capture and Storage, more on this later -  to capture and dump CO₂ (as mankind is accustomed to do with waste) our nature breaks down the CO₂ molecule and creates 2 useful materials: carbon and oxygen - through a process called photosynthesis.

The image below shows how simple and effective photosynthesis is: 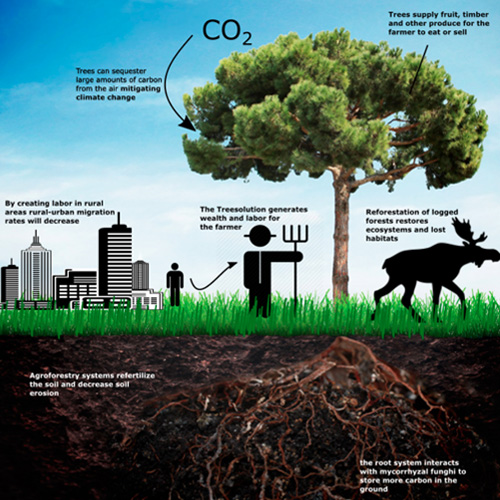 Neutralising CO₂ emissions by planting trees on degraded land is what I call 'The Treesolution'. By doing it on degraded land, we do not use fertile soil – which can be used to sow food crops. As the word says, trees are the solution. It is an effective, simple and affordable tool that can support the expensive Dutch Climate Agreement. The proposed Climate Agreement would cost the country 20 to 25 billion euros per year for around 30 years, according to the Netherlands Environmental Assessment Agency (PBL). The Treesolution requires a one-time investment of 25 billion (spread over ten years) but will then generate income to recover the investment. It does not cost money, but makes money. Moreover, we make the earth green again. The Treesolution is like a game without losses.

These are the benefits of the Treesolution:

With the Treesolution we prevent climate change - based on a prosperity-creating solution that costs no money but generates money.

I propose to add the Treesolution as a tool to the Dutch Climate Agreement and to go for net 0% CO₂ emissions by the year 2030.

Neither space nor implementation is a problem. If you continue to follow these blogs, you will see how this solution can easily be implemented. One problem, however, are some of the measures that are being taken to 'counteract' climate change. This is discussed in the following blogs. The title of my next blog is 'The wind turbine’.

On 8 October 2018, the IPCC (UN Intergovernmental Panel on Climate Change) issued an emergency call to all countries to reduce their CO₂ emissions by at least 50% by 2030. The Netherlands wants to comply with this by means of a Climate Agreement. Pieter Hoff is of the opinion that the Climate Agreement needs additional policies to achieve 0% net CO₂ emissions by 2030 and that this supporting policy can be implemented much more efficiently, quicker and less costly than the current proposals that are included in the proposed Dutch Climate Agreement.

I have asked two famous young Dutch scientists to check the viability of the Treesolution. You can download their paper here.